VERO was created in 1972 through a merger of various state toy manufacturers from the D.D.R. She mainly produced accessories for model railways (Piko) and wooden toys. The garages were mainly made for the own market in the D.D.R. and other Communist countries. The advertisements and the fuel brands that were reflected in the VERO garages were therefore unknown in the western markets. Later, when exports were also made to the western neighboring countries, brands such as SHELL, ESSO and BP were introduced. Vero used a similar system to Sio and was able to produce many different types of garages in a simple way. Many of the garages produced had refined accessories and beautiful lettering on the roof. When around 1990 the merger of both Germany was a fact, VERO ceased to exist. What is special about the VERO garages is that they used a larger scale in production (1:36) than the usual scale of 1:43 that, for example, Sio and Depreux used. The VERO brand garages are difficult for collectors to find. The garages were not offered to the toy wholesalers here until the late 1970s when the demand for toy cars and garages had already fallen so much that they saw no profit in it.

Sort by:
Best sellers Relevance Name, A to Z Name, Z to A Price, low to high Price, high to low
Showing 1-2 of 2 item(s) 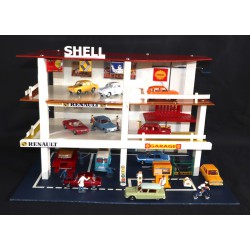