around 1950 Jean Depreux starts to make wooden garages from his own studio in his garden in Roubaix. The garages are of a high quality and very detailed. In the mid-1950s he gets the cooperation of Esso France to use their brand logo. The garages produced are beautiful and unique every week. Unfortunately, at the end of 1950, his studio burned down and he was forced to move to a large company building in Roubaix. Aided by the fact that few manufacturers in France respond to the demand for toy car garages, Depreux becomes the largest manufacturer of toy garages. Because of this success, he quickly also produces cranes, dollhouses, castles, and much more. He also became an importer of Sio garages and Roco trains. After the takeover of DCM (including producer of Roco) around 1975, the company still has a number of good years. Until Jean retires in 1979, after that the company will struggle and that will lead to the closure in 1981. Depreux garages are clearly appreciated by the collector. At toy auctions high prices are often offered for the garages, amounts of € 1000 or more are no exception.

Sort by:
Best sellers Relevance Name, A to Z Name, Z to A Price, low to high Price, high to low
Showing 1-1 of 1 item(s) 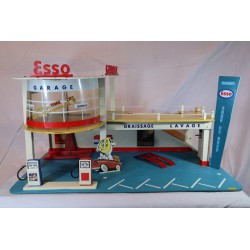